All good things come to an end...

After years of faithful service, it’s time to bid farewell to the Winamax Emperor, who will go into retirement on Tuesday 14th June 2016.

Any unused tickets will be converted into cash on your Winamax account.

The Emperor Duel on Tuesday will have a prize of €600.

Taking control of the empire is one thing. Holding onto it, another…

The Winamax Empire is threatened by revolt… take up your blasters and fight to take the throne and become Emperor. Every day of your reign earns you €300!

Be warned, the kingdom is unstable and pretenders to the throne numerous… Defend your right through the strength of your cards!

Take part in step-by-step Sit & Go qualifiers starting from just €0.50 to begin your path of conquest to the Emperor’s seat of power and wealth!

Revolution tickets can also be purchased in the Boutique.

For the duration of his/her reign, the Emperor will wear the Winamax crown

next to his table name whilst at the Winamax tables.

The final has a guaranteed prizepool of at least €1,200 with €300 reserved for the Duel and the rest paid out in cash and tickets.

You can buy-in to any step with cash or by regular ticket (example: €2 ticket).

Tickets won in Step 0 to 3 tournaments may only be used to play the next step up the ladder or the same step. 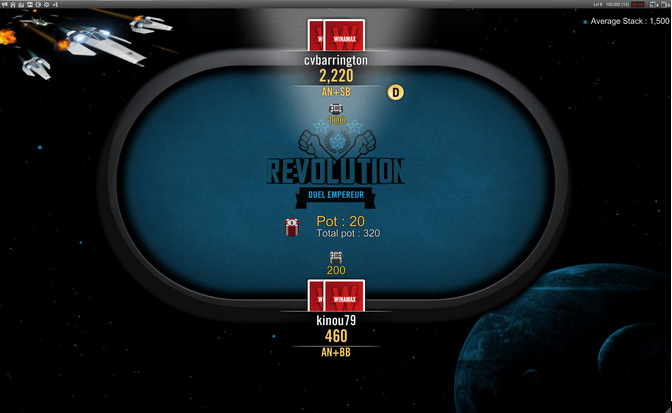