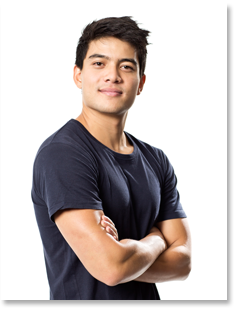 As respected at the tables as he’s likable away from the game, Pierre Calamusa is one of those young players whose rise seems to have no limit. A regular winner of the biggest tournaments on Winamax since 2010, this hasn’t kept him away from the live circuit, attested to by several notable results to his name. Counted among the top talents in French poker, Pierre has true skill and a fiery temperament.

Pierre Calamusa was not even twenty years old when he first discovered poker. At the time he was still studying and Texas Hold’em quickly became one of his biggest hobbies, playing for micro-stakes with his friends after class. It wasn’t long before he took to the internet. “I made four or five deposits of fifty euros to play Sit & Go games.” Things got serious very quickly: in less than six months, Pierre built a bankroll of more than 20,000 euros. An impressive sum which allowed him to pay off the hefty registration fees of Toulouse Business School, which he left after just one month of (boring) classes and dedicated himself to his apprenticeship.

Still in 2010, Pierre devoured every book and article he came across, discussing strategy with other players online and when playing his first live tournaments. He progressed rapidly and his first victories were not long to follow, shipping tournaments on Winamax such as the High Roller, the Main Event and the Top 50 etc… but as is often the case, Pierre Calamusa made some typical mistakes of youth: “I wasn’t particularly inclined to practice bankroll management,” he explained. “Playing two $5,000 Sit & Go games in a row against Yevgeniy Tomishenko for example, was not a good idea. Just like 5-betting all-in with 7-5 off suit in my first EPT when I had double average stack at the end of Day 2!”

During this time, Pierre enjoyed his week-ends the same way most young people do (“I love to party and I have periods of no limit”, he said about when he lived for a time in Malaga with other grinders of his age) and the inevitable happened, “In 2011 I was back to where I started. I’d lost my entire bankroll.” No choice but to be more careful, Pierre wasted no time in rebuilding, starting with a Winamax Series win and then third place in a big tournament at the Aviation Club de France in 2012. Pierre was now considered a rising star in French poker circles, and he demonstrated his prowess with two years in which he shipped an impressive number of Winamax tournaments (including a second Winamax Series title in 2013), as well as the Dream Poker Tournament organised in Aix Les Bains.

Having experienced both the pain of failure and the adrenaline of success, having learned from his mistakes and taking full advantage of his successes, Pierre Calamusa says, “I think I’ve grown up,” citing the type of players he looks to emulate, such as Antony Lellouche (“a model of kindness, even in difficult times”), Davidi Kitai (“he always makes the right decision”) and Phil Ivey (“always impressive”). “I’m less hedonistic than before, I exercise regularly. We’re not going to last long if all we do is party.”

Renowned as inexhaustible as soon as the question of a re-match is raised in poker, Pierre Calamusa has the type of affable personality which makes him sought after company at tournaments. If possible, away from the table, “He has a creative and aggressive playing style,” explained his team mate Guillaume Diaz, “he’s capable of making decisions that few players would consider, and he puts constant pressure on his opponents. He’s one of the best online tournament players in France.” Coming from a player of Volatile38’s calibre, this is high praise indeed.

When he’s not destroying his opponents in the biggest live tournaments, Pierre Calamusa can be found on Winamax.fr under the name “LeVietF0u”. 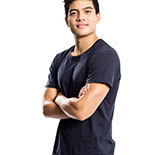 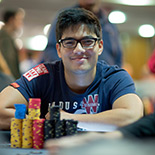 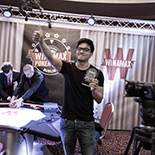 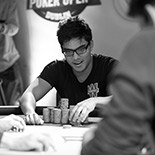 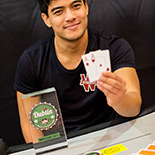