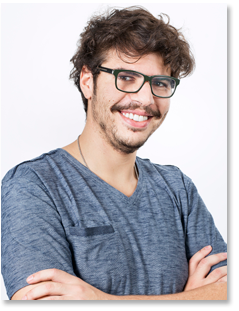 At 26, the jovial Italian Number 1 is really an unknown quantity among the pros: charismatic, but dreaded at the tables, feared as much as loved.

For Mustapha Kanit, the encounter with poker was made during adolescence. From as early as ten years old, the Italian-Moroccan was already passionate about another major 21st century card game - Magic: The Gathering: "I was always the youngest in my group of friends. One evening, they invited me to join them in their weekly poker game. The buy-in was €30, which was all the money in the world, to me. One of my friends was known for being very good: I beat him hands down!" A scattered family, along with less than exciting schooling and an unfettered adolescence were to give this mathematical fanatic a lot of free time to explore the complexities of poker and its almost infinite strategic options.

Despite warnings from his entourage, Mustapha quickly saw his future: with cards in his hands. Why not? The game fascinated him, enabling him to start making a living without having the impression of really working. "My friends and family told me I was crazy, but I quickly believed in myself, in my potential. When I celebrated my 18th birthday, I already knew that my future would be in poker." All the more so, since the young man had caught the bug, which worked out well: poker was to prove the perfect way to satisfy his thirst for travel. Mustapha packed his bags and tested Europe's poker destinations at a very young age, winning his first successes in Malta, Barcelona, Madrid and Cannes; better still, the one who had been a rather shy teen discovered his true nature at the table, one of a jovial competitor, curious of others, not lacking in the right words, a catalyst for lots of laughter. His victory in Nova Gorica's Italian Poker Tour tournament in March 2011 made him known to players in his own country, before the European pros discovered his talent six months later, in the Partouche Poker Tour final.

But it must not be believed that Mustapha ascended to the heights without any pitfalls: "At 21, I lost everything. I made bad investments with my winnings, and went through a very bad time at the tables, online and live. For a year, a year and a half, I was not winning anymore. I had to start all over again, but it wasn’t that serious: I have been through worse moments in life!" Undiscouraged, Mustapha held his head high and continued the work of learning. "This period forced me to find and correct the defects in my game." It was also at this point that he was be transformed into a real specialist in multi-table tournaments. "Up to that point, I had been playing all the formats: Sit & Go, heads-up, cash-games, and so on. I was doing well in all of them, but I felt that the tournaments were my best playing field. Tour by tour, the best players all were all specializing in a specific area. So I said to myself, OK, I'm going to put all my energy into the MTTs. "

Mustapha's work was soon to bear fruit: his creativity developed at the tables, and the results made his bankroll swell again. Then came 2015, the most successful year of his young career (until now!), the one that was to see him plant his flag on the summits of professional poker. Over the course of 12 magical months, Mustapha was to win two of the biggest online poker tournaments, the SCOOP and the FTOPS, for a total of $1.5 million, and then triumph at Monte Carlo in one of the most difficult tournaments of the year, the Super High Roller, at €50,000, and win the Barcelona EPT High Roller three months later. "I am particularly proud of my victory in Barcelona, because I won the vast majority of hands without having to show my cards. And I also managed to throw in big hands when I felt beaten". One year later, in April 2016, Mustapha repeated his success with Monte Carlo's Super High Roller, with an entry price doubled to €100,000, adding another €1.462 million to an already very profitable track record.

By the time of becoming the first Italian pro on team Winamax Mustapha Kanit was already firmly established in the very closed circle of high rollers. The players he had admired a few years earlier, such as Jason Mercier, Benny Spindler, and Daniel Negreanu, now treat him as an equal. They appreciate his constant good mood, his unparalleled sense of fair play, but fear his strategies, which often go against established trends, and his ability to adapt to every type of adversary he encounters. Nine years after his debut, the jovial Mustapha leads his country's players in the Hall of Fame, having surpassed the $9 million profit threshold in his live career in 2017, to which more than $4.5 million won online must be added. He belongs to a rare species: that of players very difficult to beat, but, when arriving at the table, still welcomed with pleasure.