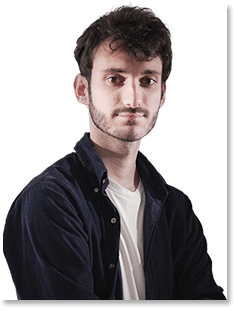 Barely four years after his first Freerolls on Winamax, this student from Marseille is the clear winner of the 2022 Top Shark Academy. As he prepares to play his first ever live tournaments, the gifted 24-year-old is brimming with motivation to take on the world's top level..

Let's embrace the spirit of the times: in order to introduce you to the winner of the 2022 Top Shark Academy, we'll take the data route, following the trail of small stones formed by his digital footprint on Winamax. This succession of figures and dates paints a remarkably accurate picture of a dazzling trajectory, as well as a player as talented as he is methodical. 19th February 2018: Loïc Debregeas plays his very first online poker game, a freeroll scheduled at 3:30 pm. Eight days later, in his 69th free tournament, the student savours his first triumph: a second place acquired in front of 8,000 other "Freerollers". The winnings - 17.28 euros - were modest... but not insignificant for a beginner: it gave him enough money to try his first real money adventure two weeks later, in a fifty-cent buy-in tournament. In April, after three months of grinding at the bottom of the ladder and over 500 tourneys in the jungle of micro-limits, the Marseille native has pocketed almost the equivalent in euros. He can leave the Freerolls behind and start climbing the rungs of real money tournaments one by one: €2 buy-in, then €5, €10, €20... until he plays his first €50 event in November, quickly followed by his first €125 Main Event. When Loïc celebrates his first four-figure performance, we are in February of 2020: his cumulative winnings on Winamax exceed €20,000. Two years after his first poker game, Loïc feels ready to face the best players on the site, those who can be found on events as expensive as they are prestigious such as the Highroller, the Purple or the Grand Tournament. He started playing with these pros in October of the same year. Just one year later, he successfully attempted to qualify for the Top Shark Academy. He won't have time to celebrate his 10,000th poker game; too busy competing in the final round of Team W's annual recruitment competition. But two weeks later, on Thursday 13th January 2022 to be exact, the champagne corks pop: after a succession of superhuman performances, _Winda is the undisputed winner of the Top Shark Academy.

Not even four years: that's how long it took Loïc Debregeas to swap his Freeroller status for that of a sponsored player. And that’s without having deposited any money, nor having burned any bridges. But what was it about poker that initially attracted him to it, leading him to become a passionate and relentless competitor almost overnight? When asked today, a very familiar keyword is immediately put on the table: no limit. But beware: Loïc is not referring to the strong sensations associated with the game of Texas Hold'em. Even before his first game, he was already thinking further ahead: "An old friend, Vivi, had taken it seriously. He explained to me that poker is a game where there is no limit to your progress.” Unsurprisingly for a student destined for a career as a maths teacher, Loïc began his apprenticeship studiously. "I began by reading everything I could get my hands on. I wanted to have all the information at hand before I started.” And so it was at the very bottom of the ladder that he moved on to the practical phase. "When it comes to Freerolls, I've done everything! I used to spend whole nights on them", he says, recalling the Winamax promotions for beginners: Poker Licence, referrals, free Sit&Gos with 5-cent prizepools… His competitive spirit was already well honed by intensive basketball practice, as well as 21st century sports: "at university, I played Dofus, an online role-playing game. I even joined the Millenium team and took part in Paris Games Week.”

With poker, he found the ultimate playground to quench his thirst for learning. Looking back on his first year of poker, Loïc decided to "put his heart and soul into it". Excellent timing: his buddy Vivi has just reached Red Diamond, the highest VIP status of Winamax: he gives him a lot of tickets, rewarded thanks to his loyalty points. His first intensive Winamax Series were a little disappointing, but this pushed him to join a coaching structure. Hours and hours of theoretical work on the tools of the modern poker player, solvers and other ICM software, only served to accelerate already great progress, and helped him to jump the hurdles that all players, whatever their level, are subjected to. "On the more expensive tournaments, I started by losing quite a lot. As I moved up quickly in stakes, the hardest part was adapting to the new types of players I was playing against. In €100 or €250 tournaments, the pots are played differently, you don't bluff in the same way, or with the same hands." But Loïc holds his ground. On all fronts: not abandoning his beloved studies (even if that means sometimes playing tournaments in the middle of a lecture), he passed his competitive examination and started teaching as part of a sandwich course. He is therefore a young man who is already very busy and who, at the age of 24, embarks on the adventure of the Top Shark Academy, a competition renowned for the maximum commitment required of candidates. "My course timetable is adjusted, so I managed to get through it, but it was quite sporty. I didn't get much sleep! I tried my luck because I liked the challenge, I wanted to show what I was capable of. And the Team players have always made me dream. When you watch In the Mind of a Pro, you can feel that they’re loving life.” His journey through the Academy was not without its challenges, but with the support of a public that gradually made him their favourite, he reached the seventh and final week of the competition, where he nailed his last opponents by earning €35,000 in profits in just twelve days.

Loïc Debegreas' rise was so rapid that there is one area he has not yet had the opportunity to explore: live poker. "I've only ever played once in a casino: in a €60 turbo at the casino in Aix (France)!” But that's just one of the benefits of the €50,000 Top Shark deal: the unique chance to play the best events on the pro circuit, accompanied by some of the best competitors in Europe. "I've wanted to give the 100% poker adventure a try for a long time. But I had one condition: I would only do it if I got a contract.” Having been offered this golden opportunity to make his dream come true, Loïc intends to make the most of this year, which will see him discover Las Vegas for the first time, the European Poker Tour, and of course the festive events of Winamax. "I'm thirsty to learn. I'm going to give it my all! I have two goals: to play as much as possible live, and to entertain people.” Even before starting his poker world tour, Loïc can already boast a great achievement: having shown that it was possible to reach the highest level whilst remaining an amateur, with a job or studies on the side - both, in his case. It's a feat he won’t take credit for alone. "You might think that an online player is alone, but that's not the case at all. There are lots of groups and Discord forums to exchange, support each other and progress together.” Loïc's latest additions to his list of contacts are Adrian Mateos, Davidi Kitai and Mustapha Kanit: this should suffice to ensure a margin of progression that is, more than ever, “no limit”...

When he's not discovering the joys of high-level live poker in the company of his Team mates, you can find Loïc on Winamax, behind the _Winda username.