Léo Lombardozzi, aka Ya 2 ecoles 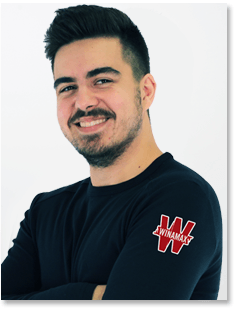 Winner of the 9th Top Shark Academy in January 2020, this Frenchman’s live poker prize list is still under construction. Don’t let that fool you, though. This young pro has been eating, sleeping and breathing cards and chips since he was a kid. Already boasting a ton of experience on many terrains of the game, this hard-working jack of all trades is ready to take on the big sharks on tour across the world.

He has the age and the looks of a grinder fed a steady diet of online MTT, but looks can be deceiving. At just 24 years of age, Léo Lombardozzi could almost be considered an old salt in the sea of cards and chips. This is made all the more obvious when he explains that his first games were “brick-and-mortar” events, when he had barely started secondary school. This was all thanks to a very poker-loving family. “My dad hosted games with his friends, and my half-brother spent tons of time on Winamax,” the Marseille-born pro recalls. The upshot is that at the tender age of 14, he was already a regular in Sit&Go games on Wednesday evenings with his old man (and had started looking for more places to play in the area), already got live vibes of Antoine Saout’s exploits at the WSOP Main Event final, and looked over his brother’s shoulder as he watched his bankroll climb to the beat of SNG and Double or Nothing. The standard stuff to get a kid instantly hooked. “At school, I soon became known as ‘the poker-playing kid’.” In hindsight, Léo thinks the game was imposed on him as a teen, “like an obligation”. So from early on, an atypical future was taking shape before his eyes. “I told myself it’s like football – if you start early, you can make it into a career!”

Fast-forward to the campus years. Léo shares an apartment with his best friend, who has a similar precocious passion for Texas Hold’em. “One day he had to choose between a chip case and a new video game. He went with the case.” But they had different approaches. “I dabbled in everything, Sit&Go, DoN, MTT, live at Aix-en-Provence, but I didn’t have a plan. He was much more methodical. He worked on his game, he’d risen up the ranks in cash games to where he was sitting at the same table as the big guns at that time, like Locsta.” (NB: that’s Marc Inizan, a former Team Pro). “One fine day, he said ‘Don’t you think it’s time you learned this game for real?’ ”

Since then, Léo has been playing at two tables: studying ecology management while learning the art of cash games, and it seems he believes online tables are harder to crack than exams. “I was the type of student who got by without sweating it. I’d just study the day before and I’d pass. In poker, on the other hand, I’d just swing around. I went from winning MTTs to a rakeback pro in cash games.” Translation: Léo would rise and fall in the limits as his luck and his bankroll fluctuated. He learned the hard way: “I’d show my hand histories to my roommate and he’d tell me where I’d gone wrong. ‘That was dumb, and there again’, stuff like that.” Even though Léo remembers those days as when he “was sinking, lost every day for two years, surviving with the rakeback, then just lying on my back in the shower,” he racked up the experience and one way or another, those thousands of hours started to pay dividends. He climbed up in the stakes, avoided getting taken down and ended up planting his flag in 400 NL. “I made a lot of mistakes. I wanted to go too fast,” he now recognizes. The paradox of it is that when you’re no good, you don’t realize it, but the day you do realize it, it hurts! Luckily for me, I’ve had several incredible coaches.”

After running this path sprinkled with pitfalls, Léo was now sitting in limits that are tough to beat and had built up personal work ethic. “Analyse the field, thesis, antithesis and experimentation are my daily business.” He’s satisfied that he acquired financial independence so young: “It’s something I’m proud of, I never had to get a real job. Even during the bad spells, poker still paid my rent and my groceries.” At that point, he could afford to travel and compete in some live tournaments with buy-ins going from €500 to €2,000, and resumed an assiduous presence in the MTT sections of poker sites. In short, things were going well and Léo was on a quest for new challenges. His coaches suggested a unique and ambitious one. “Seeing that I’d made progress, they asked if I wanted to join them on SpinForWin, a new coaching site they were launching.”

This was in April 2019, when Léo set off on his new adventure: teaching poker to others, becoming the teacher after so many years as a student through tutorial videos, private lessons and live sessions on Twitch. “It was tough to get started, because I tended to denigrate my own skills, and because it takes a lot of commitment.” Yet Léo would soon be reassured as to his legitimacy as a coach. Between April and September, he won two Winamax Series titles and two Monster Stacks, for total winnings of over €25,000. As his prize list grew, he started to like the unique strategy and routine offered by multi-table tournaments more and more. His transition to MTTs is validated. “In cash games, you don’t remember your performances and you’re happy with day-to-day fluctuations. In tournaments, there’s a real score, it leaves a trace. Plus, in an MTT you have to juggle between so much information.”

If you’re bent on becoming a tournament player, why not do it with the best team in Europe? In autumn of 2019, Léo signed up to the Top Shark Academy for the very first time (Team Winamax’s annual recruitment competition). This trial transpired in the most impressive of ways. The competition was intense, but over the course of seven weeks, Léo demonstrated the extent of his technical mastery, coming out of the practical tests without any missteps and impressing the panel of judges with the ease and verbal dexterity he displayed in the instructional exercises. On the final test, a marathon MTT lasting eight days and eight nights, he pinned down his last three competitors with an explosive run in the biggest MTT of the year, the 3 Million KO Event. Exhausted but happy, he savoured the moment of becoming a member of one of the most elite clubs in the poker world. “This competition is a true test. It’s exhausting even for an expert player.”

As the ninth winner of the Top Shark Academy, Léo Lombardozzi became the latest addition to Team Winamax in January 2020 despite a nearly blank slate when it comes to live tournament prizes. Is that a problem? Not at all. Lifting trophies is precisely his new mission on the contract he just earned hands down. And he’s totally geared up for the challenge. “It’s too early for me to talk about my skills as a tournament player, but I know I’m the candidate who has spent the most time studying the game,” he said when he signed up for the competition. Surrounded by some of the best tournament players in the world, he will represent Winamax all around the poker world and will discover legendary venues like Las Vegas, setting foot in the city for the first time this summer at the WSOP. “I’d love to make my mark, little by little, on the live poker tour, and get to the point where that’s all I’m doing. To be sponsored in poker is such a rare opportunity. How many of us are there in the world, maybe thirty or so?”

When he’s not seeking quality time in the company of the rest of our Team, you can find Léo in fitness centres in Porto (where he lives now) or on Winamax under the pseudonym Ya 2 ecoles.