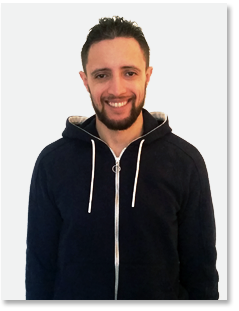 Having converted from live cash games to tournament play, a Pot-Limit Omaha High-Low enthusiast, former top sportsman turned card shark, and even a world record holder, Aladdin Reskallah is certainly a multifaceted player. A hard competitor, he emerged victorious at the 2016/2017 edition of Top Shark Academy after masterfully dominating the final week. This was the perfect springboard for showing off his aggressive play style at the tables of the world's biggest tournaments.

Aladin came to poker quite late. He was studying in Sherbrooke, Canada, as part of an academic exchange with Lyon I university, finishing a second master's degree in international relations, after a first in education science. "I used to watch broadcasts of the WPT and WSOP on TV," he explains, "Then one day, one of my best friends, Yassine, invited me to play for play money on Facebook. I spent so many nights doing this!" A little while later he laid his hands on proper chips as part of a trip to Las Vegas in 2011. Poker wasn't the main goal of this trip to Nevada, but he couldn't miss the chance to sit at a proper table in Vice City. Aladin spent $60 to play his first tournament... and won! "Beginner's luck!" he says modestly.

Despite this encouraging start, Aladin did not try and build on his MTT success, but instead turned to live cash game tables. "I thought there was more to win on this side of poker. But I soon realised that it wasn't so easy!" To compensate for this lack of theoretical knowledge, Aladdin teamed up with his buddies Yassine and Marwan to create a poker think tank – Team4betlight – which later inspired Aladin's nickname. "With Marwan, we had greater knowledge of pure game strategy," Aladin recalls. "Yassine, having studied physical sciences and economics, was the first to focus on mathematical logic. He gave us all the statistical insight."

As 2011 drew to a close, Aladin moved to Montreal. In Quebec's economic centre, he discoverd the Playground Poker Club, where he spent many nights, while also frequenting other casinos in the city. At the same time, he started playing online poker tables while keeping down a daytime job in the finance sector. "I was terrible at managing my bankroll at the time. I used to play games with far too high limits!"

Tournament poker gradually became part of his routine. Having gone to Sherbrooke primarily to train with the university athletics team, in poker tournaments he found some of that same competitive spirit he had craved several years earlier. "I tried just about all formats and variants," says Aladin, who admits he has a weakness for Pot-Limit Omaha High-Low on his Top Shark page. "Now that I can play it on Winamax, I intend to take it seriously!"

Always in touch with the latest trends related to our favourite hobby, Team4betlight set up a Twitch channel with a lofty goal in mind. "Marwan brought it up after watching lots of American players get started. After my live qualification to join the cast of a competitor's reality-TV show, we tried something a little crazy: we wanted to set the world record for the longest poker stream!" In the space of one week, from 17 to 24 July 2016, the three amigos took turns in front of the camera, a total of 168 hours, and achieved their goal. It was a fantastic achievement and one that brought in donations for the families of the victims of the Nice attack.

Aladin had already been playing poker as his main job for several months by that time. "I took a sabbatical to try to turn professional. Joining then winning the Top Shark Academy was not only a dream, but a goal I very much wanted to achieve." In week 2, he knew from the outset what difficulties he would face, then proceeded to go on an almost flawless run, including two doubles in weeks 4 and 6 and as many Major titles. The final, where he had "the run of [his] life", was a week-long one-man show, at the end of which he beat a five-year-old points record.

This colossal performance has given Aladin the confidence and focus to approach the coming year on the circuit with the desire and determination to achieve a number of big wins. And of course we wish him the best of luck!