With Gangs, you can now play Guns&Glory as a team: from 5 to 25 players, united by the bonds of a gang, a name, a motto, a coat of arms.

Together, challenge other gangs, fight Battles, make plans in Winachat, earn trophies and accumulate honour points to become a feared and respected gang…

1. Creating or joining a gang

If you have the heart of a leader and your account is validated, create a gang. You must choose a gang name, a motto and a universe for the HQ as well as the gang coat of arms.

Take care when choosing your gang name as unlike the motto and universe (which can be changed at any time), the gang name is permanent.

Once the gang is created, you may begin inviting players with the “INVITE PLAYERS” button in your HQ: you may send invitations by email, Facebook, Twitter or Google+.

A gang must have at least 5 players to be active (with a maximum of 25 players). If you are unable to recruit enough members you may disband your gang using the button in your HQ.

You may join an existing gang: 1/ via invitation from a friend, 2/ searching by gang name or even 3/ selecting a gang from the list you are shown (gangs with a similar Guns&Glory level to you).

Once you find the gang of your dreams, apply and wait for a reply from the gang who will accept or decline your application. You may only apply to one at a time. If it takes too long for them to reply, you are able to withdraw your application in order to apply to a different gang.

After becoming a gang member, head to the HQ, the gang headquarters. There you will find all the members of your gang, your available actions, gang news…

A hierarchy exists in each gang with 3 different ranks: the gang boss, the lieutenants and the henchmen.

The creator of the gang is automatically the gang boss. There is only one boss in each gang. His avatar appears in the front rank in the HQ.

He can accept (with the lieutenants) new gang members, promote henchmen to lieutenant, demote lieutenants to henchmen and also exclude members from the gang (in the HQ, the actions available for each member appear when hovering the mouse over the member avatar).

The boss may choose to abdicate and give his position to another gang member. He cannot quit the gang while he is the boss. He may also be removed by the lieutenants.

A lieutenant may choose to apply for the position of gang boss. A vote then takes place between all the lieutenants with the exception of the postulant. They have 48 hours in which to cast their vote, choosing between the current boss and the postulant. The postulant must have an absolute majority to overthrow the boss and take his power (should the vote be a draw, the boss retains his position). When the boss is removed, he becomes a henchman. Ranks are frozen during the vote. A boss can only be removed in a gang with 2 lieutenants or more. A lieutenant cannot apply for boss twice in a row; he must wait until after another lieutenant has applied.

The lieutenants are named by the gang boss from among the henchmen. They are to the boss as a sous-chef is to a chef. Their avatars appear in the second rank in the HQ, surrounding the boss.

Their number is limited by the number of total gang members (one lieutenant per 5 members up to a total of 7 for 25 members, find full details in the rules).

Lieutenants may accept new members and exclude henchmen from the gang.

Henchmen make up the rank and file of the gang, always ready for combat! They appear in the background of the HQ.


3. Honour points and the gang level

Just like XP points in the individual Guns&Glory, honour points represent the strength of your gang. 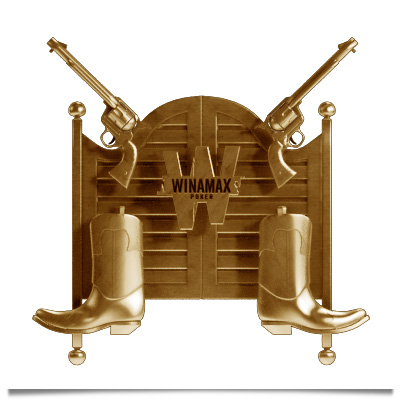 Honour points allow you to move up the levels. Each level corresponds to an improvement to your gang coat of arms. There are 30 gang levels.

Every Monday at 07:00 CET, gangs win or lose honour points according to the Guns&Glory levels of their members (each players’ weapon) and their activity that week.

Each member active that week (at least one XP point earned in the previous 7 days from Monday to Monday at 07:00 CET) earns honour points for the gang according to this scale: [Member G&G level] x [rank coefficient].

Every member inactive that week (no XP points earned in the previous 7 days) loses honour points for the gang according to this scale: [Member G&G level] x [rank coefficient].

For example, a player with the Molotov Cocktail (Level 11), and who is a lieutenant in his gang will accumulate each week that he earns at least one XP point: 11x1.5 = 16.5 honour points. Weeks in which he is inactive (0 XP points), he loses his gang 16.5 honour points.

Every gang is able to challenge other gangs on Winamax (with a maximum difference of 4 gang levels) at specific poker formats.

The lieutenants or gang boss may send challenges. When a challenge is sent to another gang, you propose 3 game types for the challenge: one tournament format, one of cash game and one of Sit&Go from the list of available challenges.

The challenge begins at 07:00 CET the next morning (once the challenge is accepted) and lasts for 5 days. The performances of every gang member in the chosen game type are counted throughout the challenge duration.

A gang may only have one offensive and one defensive challenge in progress at any one time. They may also only receive one challenge request at a time.


When a gang is in a defence challenge:


Furthermore, there is a 10 day delay to re-challenge a gang that has already been attacked.

Only players present in the gang at the time an offensive or defensive challenge is begun may participate in the challenge. Any new players do not score points in the challenge.
Your gang’s challenge history can be found in the “Our challenges” section.

Battles are weekly competitions open to every gang on Winamax; the game type is automatically set and honour points can be won. They can be found in the “Battles” section.

Trophies are awarded to gangs when they complete accomplishments in challenges or Battles. They can cause the gang to both win and lose honour points. There are 6 collections of 10 trophies which can be seen in the “Trophies” section. In each collection, there is a unique trophy which can only be held by one gang (the best gang in that particular collection). This trophy can be stolen at any time by another gang should they overtake the holders.

In the “Trophies” section, you can also find the “Top 10s” of your gang. The best gang member performances in tournaments, Sit&Go and cash games.

When a gang is created, a discussion room is also created in Winachat including all the gang members. Here you can consult on challenges or discuss battle strategy and you will also receive notifications of all gang news.

You will also receive notification messages by email, in the poker software and in your gang HQ.