Deal making allows players on the final table of a multi-table tournament to negotiate the distribution of the remaining prizepool.

Thanks to the “Deal” feature, players on Winamax are now able to put their negotiation skills to the test and attempt to bargain the best possible pay-out when playing on a final table.

Deal making is not availabe in the KO-format.

Deal-making while at the final table

Deal making may begin at any point while on the final table of a multi-table tournament (6 players remaining in a 6-max tournament, 9 players in a full-ring tournament, etc.).

When deal-making is possible, the “Deal” option appears in the bottom left corner of the table window. In order for deal making to begin, all remaining players must tick the checkbox, therefore indicating their desire to make a deal. Deal-making can in no case begin if one or more players have not ticked the box.

While deal making is in progress, the tournament is paused. The players have a maximum of 20 minutes to reach an agreement. After this period, the tournament will automatically restart, with no change to prize distribution. Deal making can begin again if all remaining players wish to do so.

Deals are managed by a mediator. This role is given by default to the player holding the most chips at the time deal making begins. However, it is possible for the chip leader to transfer this role to another player.

The Mediator is responsible for proposing a new pay-out structure to the other players, who then must accept or refuse the offer.

When deal-making begins, the system automatically suggests a prorata pay-out structure, based upon the number of chips currently held by each player.

Players can negotiate a different distribution, according to their desires. The mediator can manually alter the pay-out amounts in the column next to each player’s table name.

All players are able to discuss the deal and make suggestions using the dedicated chat function.

The deal is done when all players have accepted the pay-out structure proposed by the moderator. Once accepted, all players will be immediately awarded the negotiated sums, and the tournament will continue, with the remaining 2.5% of the prizepool going to the tournament’s winner.

Note: deal-making may be cancelled at any moment should any player decide to abandon negotiations. In such a case, the tournament restarts without any change to pay-out.

The mediator is in charge of proposing a new pay-out structure that is acceptable to all remaining players. He may do so by modifying the amount in the field to the right of each player’s table name.

All players can give their opinion using the chat function on the left-hand side of the window.

Any deal will always leave 2.5% of the prizepool in play. This amount goes to the tournament’s eventual winner. The sum is automatically calculated and is shown at the top of the window. Once the mediator has finished modifying the prize distribution, he must click on the “Propose deal” button. 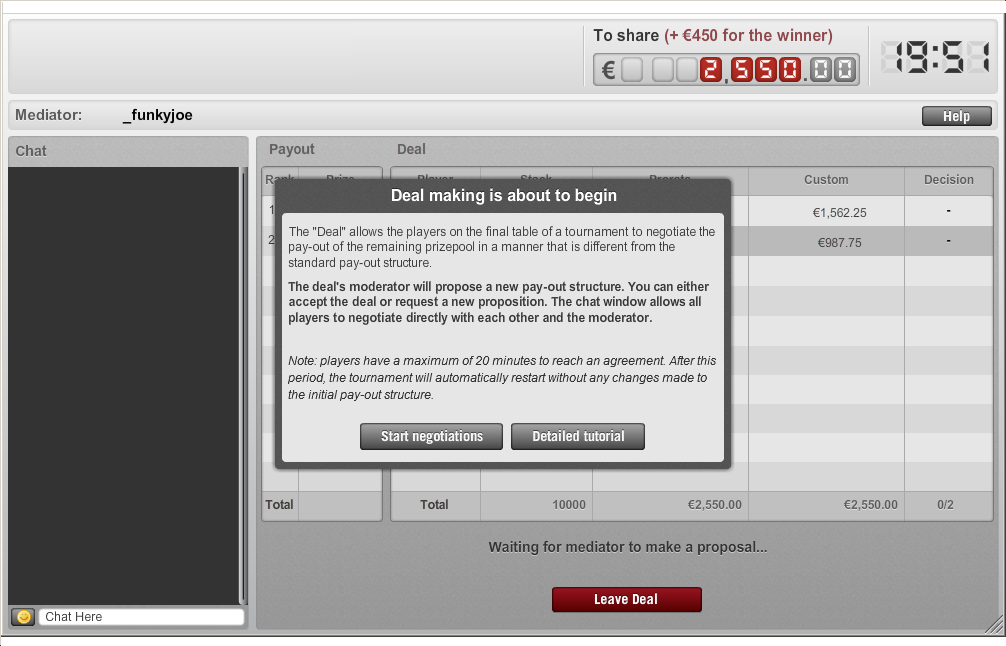 Once the mediator has proposed a deal, the other players then have three options: accept the deal, request a re-negotiation or abandon deal-making. In order for the deal to be concluded, all players must accept the proposition.

To restart negotiations or abandon deal-making, it only requires one of the participating players to do so. 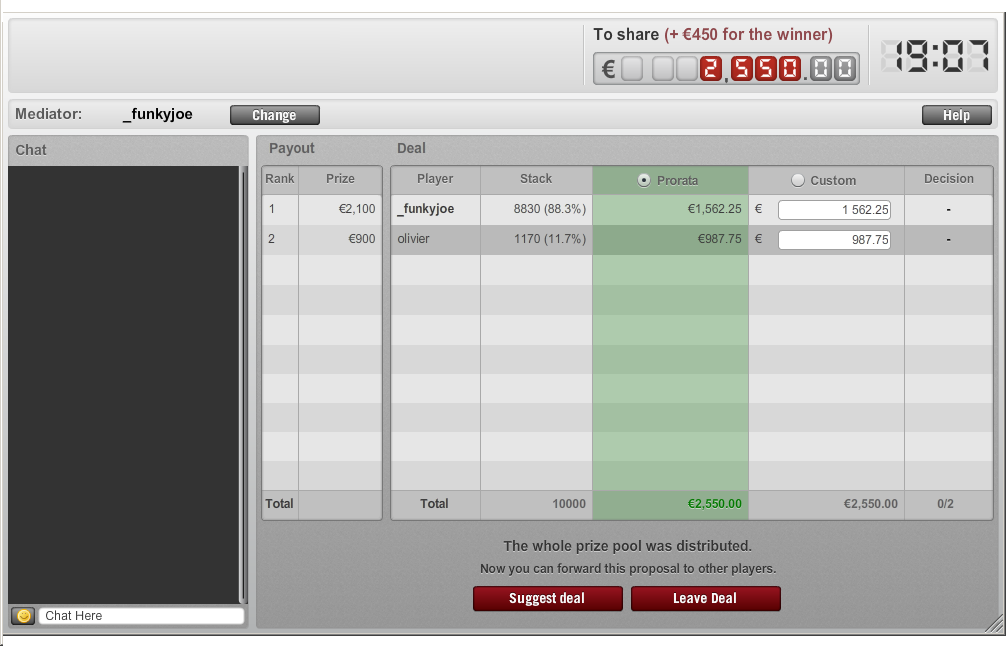